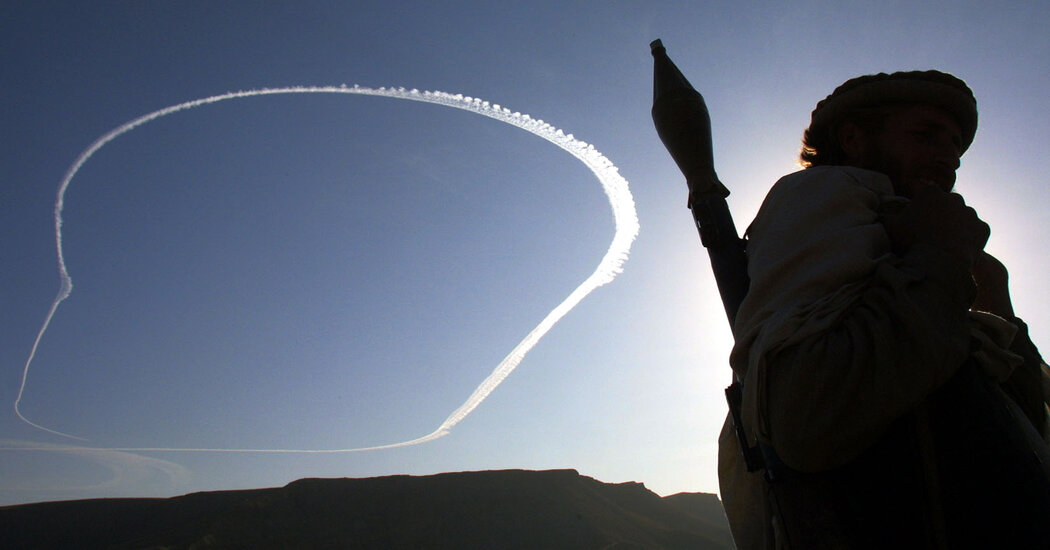 President Biden, declaring that the United States had long ago accomplished its mission of denying terrorists a safe haven in Afghanistan, announced April 14 that all American troops would leave the country by Sept. 11.

A combat mission that has dogged four presidents — who reckoned with American casualties, a ruthless enemy and an often corrupt and confounding Afghan government partner — will at last come to an end.

Mr. Biden conceded that after nearly 20 years of war, America’s longest on foreign soil, it was clear that the U.S. military could not transform Afghanistan into a modern, stable democracy.

“War in Afghanistan was never meant to be a multigenerational undertaking,” Mr. Biden said in an address from the White House Treaty Room.

Mr. Biden said the roughly 2,500 to 3,500 remaining American troops would be back home by the 20th anniversary of the Sept. 11, 2001, attack, the seismic event that precipitated the initial military invasion.

Now, as the president pledges to continue support for Afghanistan and as peace talks remain deadlocked, the enduring objective of the two-decade war remains unchanged: ensuring that Afghanistan is never again used to plan and launch terrorist attacks.

Why did the United States invade Afghanistan?

Weeks after Al Qaeda attacked the United States on Sept. 11, President George W. Bush announced that American forces had launched attacks against the terrorist group and Taliban targets in Afghanistan.

“These carefully targeted actions are designed to disrupt the use of Afghanistan as a terrorist base of operations, and to attack the military capability of the Taliban regime,” the president said.

Even then, the president warned that Operation Enduring Freedom would entail “a lengthy campaign unlike any other we have ever seen.”

By December 2001, the Qaeda leader Osama bin Laden and other top commanders had fled to safety in Pakistan, a nominal U.S. ally. American forces did not pursue them, and Pakistan ultimately evolved into a safe haven for Taliban commanders and fighters, who in subsequent years crossed the border to attack American and Afghan forces.

Inside Afghanistan, American troops quickly toppled the Taliban government and crushed its fighting forces as 2001 drew to a close. In May 2003, Secretary of Defense Donald Rumsfeld announced an end to major combat operations in the country.

How did the mission in Afghanistan evolve?

After routing the Taliban, the United States and NATO pivoted to rebuilding a failed state and establishing a Western-style democracy, spending billions trying to reconstruct a desperately poor country already ravaged by two decades of war, first during the Soviet occupation of the 1980s and then during the proceeding civil war.

There were early successes. A pro-Western government was installed. New schools, hospitals and public facilities were built. Thousands of girls, barred from education under Taliban rule, attended school. Women, largely confined to their homes by the Taliban, went to college, joined the work force and served in Parliament and government.

But corruption was rampant, with hundreds of millions of dollars in reconstruction and investment money stolen or misappropriated. The government proved unable to meet the most basic needs of its citizens. Often, its writ barely extended beyond the capital, Kabul, and other major cities.

In 2003, with 8,000 American troops in Afghanistan, the United States began shifting combat resources to the war in Iraq, launched in March of that year.

What happened on the battlefield?

The Taliban rebuilt their fighting capabilities, despite a steady influx of American and NATO troops, who secured territory previously controlled by the Taliban and sought to win over Afghans with promises of new schools, government centers, roads and bridges.

With the Taliban posing an enhanced military threat, President Barack Obama deployed thousands more troops to Afghanistan as part of a “surge,” reaching nearly 100,000 by mid-2010. But the Taliban only grew stronger, inflicting heavy casualties on Afghan security forces despite American combat power and airstrikes.

In May 2011, a U.S. Navy SEAL team killed Osama bin Laden in a compound in Abbottabad, Pakistan, where he had been living for years near a Pakistan military training academy. In June, Mr. Obama announced that he would start bringing American forces home and hand over responsibility for security to the Afghans by 2014.

By then, the Pentagon had concluded that the war could not be won militarily and that only a negotiated settlement could end the conflict — the third in three centuries involving a world power. Afghan fighters defeated the British army in the 19th century and the Russian military in the 20th century.

With the war at a stalemate, Mr. Obama ended major combat operations on Dec. 31, 2014, and transitioned to training and assisting Afghan security forces.

Nearly three years later, President Donald J. Trump said that although his first instinct had been to withdraw all troops, he would nonetheless continue to prosecute the war. He stressed that any troop withdrawal would be based on combat conditions, not predetermined timelines.

But the Trump administration also had been talking to the Taliban since 2018, leading to formal negotiations that excluded the Afghan government, led by President Ashraf Ghani.

What is the status of peace talks?

In February 2020, the Trump administration signed an agreement with the Taliban that called for all American forces to leave Afghanistan by May 1, 2021. In return, the Taliban pledged to cut ties with terrorist groups such as Al Qaeda and the Islamic State affiliate in Afghanistan, reduce violence and negotiate with the American-backed Afghan government.

After the deal was signed, the Taliban stopped attacking American troops and refrained from major terrorist bombings in Afghan cities. The United States reduced air support for government forces, generally restricting them to instances in which Afghan troops were in danger of being overrun.

The primary objectives of the 2020 deal were for Afghan leaders and the Taliban to negotiate a political road map for a new government and constitution, reduce violence and ultimately forge a lasting cease-fire.

Because of their strong battlefield position and the imminent U.S. troop withdrawal, the Taliban have maintained the upper hand in talks with the Afghan government, which began in September in Doha, Qatar, but have since stalled. The Pentagon has said the militants have not honored pledges to reduce violence or cut ties with terrorist groups.

After Mr. Biden announced in April the U.S. withdrawal of American forces, NATO said its 7,000 troops in Afghanistan would coordinate their withdrawal with the United States.

The Biden administration says it continues to support peace talks, but the Taliban appear in no hurry to negotiate. Nor have they explicitly said they would agree to a power-sharing government, implying instead that they intend to seek a monopoly on power.

Can Afghan security forces hold off the Taliban without U.S. troops?

In recent months, Afghan security forces have abandoned dozens of checkpoints in the face of Taliban assaults. Military and police units have been hollowed out by desertions, low recruitment rates, poor morale and leadership and the theft of pay and matériel by commanders. They have suffered high casualty rates, which American commanders have said are not sustainable.

Security forces also have abandoned checkpoints on several major highways, allowing the Taliban to set up roadblocks and impose tolls and taxes on truckers and motorists, providing official receipts valid anywhere in the country. The militants also have set up checkpoints on the outskirts of major cities, raising fears that they will attempt to wrest control of cities from the government after international forces depart.

The United States has spent at least $4 billion a year on the Afghan military — $74 billion since the start of the war. The Biden administration has pledged to continue supporting Afghan forces after American troops depart.

A classified intelligence assessment presented to the Biden administration this spring said Afghanistan could fall largely under Taliban control within two to three years after the departure of international forces.

And the Taliban have given no indication they will abandon their annual spring offensive, when they typically ratchet up combat operations with the arrival of warmer weather.

“The Taliban is confident it can achieve military victory,” the threat assessment concluded.

The report added: “The Taliban is likely to make gains on the battlefield, and the Afghan government will struggle to hold the Taliban at bay if the coalition withdraws support.”

A pair of massive wildfires within 150 miles of each other are terrorizing thousands in northern California two years after Gov. Gavin Newsom cut … END_OF_DOCUMENT_TOKEN_TO_BE_REPLACED