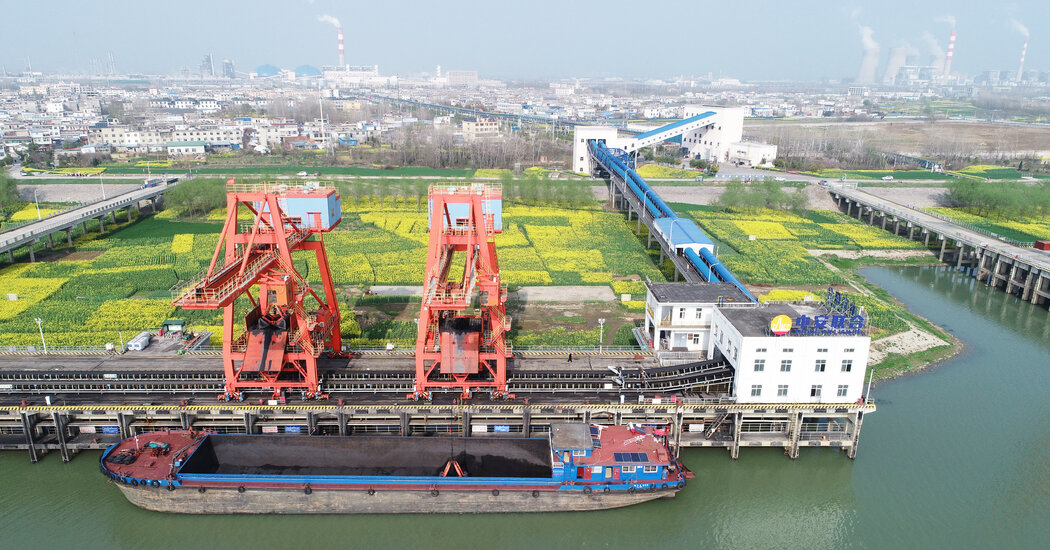 The United States and China do not agree on much nowadays, but on climate change both countries are publicly pledging to do more to fight global warming. The problem will be working together on it.

On Thursday, President Biden’s climate envoy, John Kerry, met in Shanghai with his counterpart to press China on reducing its carbon emissions, at a time when an emboldened Communist Party leadership has become increasingly dismissive of American demands.

In Beijing’s view, the United States still has much ground to recover after walking away from the Paris climate agreement, the 2015 accord to address the catastrophic effects of warming.

Mr. Biden’s commitments to now make climate change a top priority are, to officials in Beijing, merely catching up to China after its leader, Xi Jinping, last year pledged to accelerate the country’s efforts to reduce carbon emissions.

“The U.S. has neither the moral standing nor the real power to issue orders to China over climate issues,” the Global Times, a Chinese newspaper that often echoes official thinking in brashly nationalist tones, said in an article on Wednesday before Mr. Kerry’s visit.

A main purpose of Mr. Kerry’s travels to China and elsewhere has been to rally support for Mr. Biden’s virtual climate summit of dozens of world leaders next week. Mr. Xi has not yet accepted the invitation, but he will join a similar conference on Friday with President Emmanuel Macron of France and Chancellor Angela Merkel of Germany.

It was a pointed reminder that China no longer sees the United States as so central to its international priorities.

There are other challenges, too, that could derail even basic coordination between the two countries, starting with the sharp deterioration of relations that began under President Donald J. Trump and shows no sign of improving.

The intensifying rivalry over technology could spill into climate policy, where innovations in energy, batteries, vehicles and carbon storage offer solutions for reducing emissions. Already, American lawmakers are demanding that the United States block Chinese products from being used in the infrastructure projects that Mr. Biden has proposed.

“If there is a serious lack of basic trust, strategic and political, between China and the U.S., that will inevitably hold back deepening cooperation in the specialized sphere of climate change,” Zou Ji, the president of Energy Foundation China, who has advised Chinese climate negotiators, wrote recently in a Chinese foreign policy journal.

Secretary of State Antony J. Blinken and other American officials have said they are prepared to cooperate with the Chinese government on issues like climate, even as they confront it on others, including the crackdowns in Hong Kong and Xinjiang and the menacing military operations against Taiwan and in the South China Sea.

It is not clear that Mr. Xi’s government is prepared to compartmentalize in the same way. Officials have indicated that the souring of relations has spoiled the entire range of issues between the two countries.

“Chinese-U.S. climate cooperation still faces many internal and external constraints and difficulties,” said a study released this week by the Shanghai Institutes for International Studies.

“The United States government regards China as its biggest strategic competitive rival,” the report added, warning that the tensions “exacerbated the difficulties of collective action in global climate governance.”

Even if broader tensions hold back close collaboration, talks like those this week could help the two countries to at least understand each other’s plans.

“I do not believe that cooperation is likely given the current political tensions, but coordination is essential,” said Kelly Sims Gallagher, a Tufts University professor who worked under President Barack Obama as a senior adviser on climate issues and China. “Both governments need to understand what is happening in the other country in terms of emissions trajectories, policies and plans.”

John Podesta, who also helped the Obama administration draft its climate strategy, said the Biden administration had an interest in keeping “the channel of communication open.”

“Then it was a kind of anchor of stability,” he said in a conference call with journalists, referring to the climate issue. “Now it has to be preserved as a place of normal diplomatic discussions.”

Chinese officials and state media outlets noted Mr. Kerry’s arrival but did not play it up, except to say that he would meet with Xie Zhenhua, the chief Chinese negotiator in the talks that led to the Paris agreement. Mr. Xie, 71, was pulled out of semiretirement this year to resume the role of China’s climate envoy.

Both he and Mr. Kerry — a former secretary of state and Senate colleague of Mr. Biden’s — have high-level support from the leaders who appointed them, making them powerful voices in the political bureaucracies they must confront at home.

Mr. Xie “presumably has the seniority and connections to play a coordinating role between the different ministries and agencies, and therefore his office is one way of giving the issue more heft,” said Lauri Myllyvirta, the lead analyst at the Center for Research on Energy and Clean Air in Helsinki, who closely follows Chinese climate policy. “His position has the aura of having been installed from the top.”

The Chinese climate official also oversaw a study from Tsinghua University last year that he has indicated helped shape Mr. Xi’s goals to achieve net carbon neutrality for China before 2060.

Chinese leaders are drafting an “action plan” for Mr. Xi’s goal of reaching a peak in carbon dioxide emissions before 2030. That plan could give China an opening to accelerate toward an earlier peak — possibly by mid-decade — a goal that Chinese and foreign experts have urged. Even if Mr. Xi ultimately embraces a faster timetable, he is generally prickly about being seen to make concessions to Washington.

With the United States, Mr. Xie may push China’s own demands for international climate negotiations. While China’s emissions have raced far ahead of other countries’, it has tried to remain a leading voice for the poorer developing countries that emit far less.

At a video meeting with Canadian and European officials last month, Mr. Xie praised the return of the United States to the climate change negotiations, according to an official Chinese summary of the meeting. He also appeared to gently suggest that the Biden administration should not assume that it naturally belonged at the head of the table.

Obaidullah Amin made his way last week to the Kabul airport with his wife, Maryam, and their two children, joining thousands of other Afghans … END_OF_DOCUMENT_TOKEN_TO_BE_REPLACED