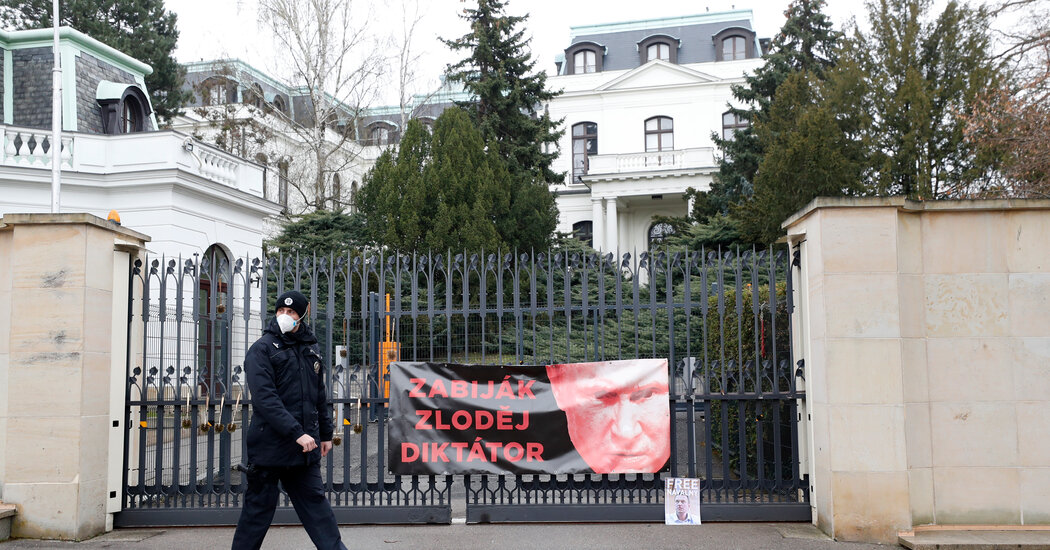 The Czech Republic on Saturday blamed a series of mysterious 2014 explosions at Czech ammunition depots on an elite unit of Russia’s military intelligence service — a group that Britain has linked to a 2018 attack with a nerve agent on a former Russian spy in Salisbury, England.

Prime Minister Andrej Babis said at a Prague news conference that his government would respond by expelling 18 Russian diplomats, whom it had identified as spies. He said there was “clear evidence,” assembled by the Czech intelligence and security services, showing “reasonable suspicion” that the Russian group, known as Unit 29155, had been involved in the blasts in late 2014, which killed two Czechs.

The announcement underscored the breadth of Russia’s efforts to expand its influence and pursue aggressive actions around the world, including military-style operations, assassinations and cyberattacks.

The elite Russian unit has operated for at least a decade, focusing on subversion, sabotage and assassination beyond Russia’s borders. It first came to light after the March 2018 attack in Salisbury, England, on a turncoat Russian ex-spy, Sergei Skripal, and his daughter, Yulia, using the nerve agent Novichok. Both fell gravely ill but later recovered.

Britain blamed the Salisbury attack on Russian military intelligence, known as the G.R.U., and identified two of its agents, who traveled under fake names as Alexander Petrov and Ruslan Boshirov, as the prime suspects.

As the prime minister spoke in Prague, the anti-organized-crime unit of the Czech national police issued its own statement, saying that two Russian men using the same names were wanted in connection with an unspecified “serious crime” and were known to have been in the Czech Republic — including the Zlin region, where the ammunition depots exploded — from Oct. 11 to Oct. 16, 2014, the date of the first blast.

The Czech police also released photographs of the two men, who looked like the men shown in photographs released in 2018 by Britain. The police said the men had used at least two different identities and asked anyone who had seen them or knew anything about their movements in the Czech Republic to call a hotline.

Mr. Babis, the prime minister, did not accuse the two Russians directly of involvement in the arms warehouse explosions, but he said there was “unequivocal evidence” that agents working for Russian military intelligence had been involved.

“Czech Republic is a sovereign state and must react accordingly to those unprecedented revelations,” Mr. Babis added.

The Czech Republic, a member of NATO, has expelled Russian diplomats in the past but has never ordered as many out as it did on Saturday. The expulsions came just days after Washington expelled 10 Russian diplomats over interference in last year’s U.S. presidential election and the hacking of computer systems used by government agencies.

Poland, another NATO member, also expelled Russia diplomats in recent days, ordering three to leave on Thursday in what Warsaw said was a gesture of “solidarity” with the United States.

The Czech action, however, was more severe and unusually sweeping.

“I am sorry that Czech-Russian relations will suffer, however, the Czech Republic must react,” the acting foreign minister, Jan Hamacek, said in Prague.

What caused the ammunition depot blasts, which began in the village of Vlachovice and resumed at a nearby depot in December 2014, has never been fully explained.

They coincided with efforts by Ukraine to increase its supply of weapons from abroad as it struggled to recover eastern territory seized by Russian-backed rebels in the summer of 2014.

Czech media reports on Saturday also linked the blasts to what they said may have been a Russian drive to halt the delivery of Czech-made weapons to forces fighting in Syria against President Bashar al-Assad, a close ally of Moscow.

Obaidullah Amin made his way last week to the Kabul airport with his wife, Maryam, and their two children, joining thousands of other Afghans … END_OF_DOCUMENT_TOKEN_TO_BE_REPLACED