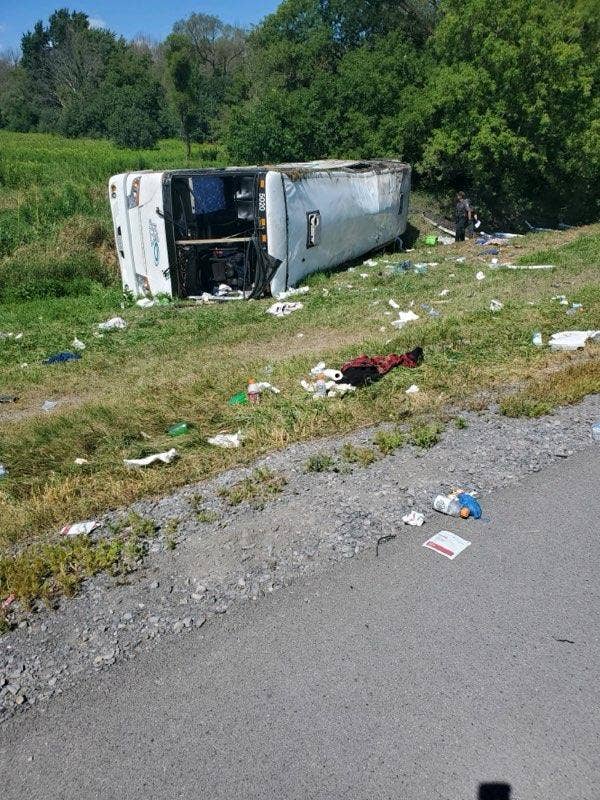 Images of the crash show debris scattered over the shoulder of Interstate 90 in Brutus, N.Y., about 250 miles northwest of New York City – in between Buffalo and Syracuse.

The battered bus had lost its windshield and appeared to have come apart at some of its seams.

The crash caused traffic to back up on the interstate for eight miles for at least an hour, state police said. All lanes reopened to traffic around 6:30 p.m.

In a follow-up statement, State Police said there were 57 people in the vehicle, including the driver.

All of them have been hospitalized with injuries ranging from serious to minor.

Auburn Community Hospital spokesperson Matthew Chadderdon told the Associated Press that the bus was headed for Niagara Falls and that the passengers included children.

Auburn received 27 victims, three of whom were transferred to the trauma center at Upstate University Hospital in Syracuse.

A spokesperson for Upstate said it had received 25 patients altogether.

A pair of massive wildfires within 150 miles of each other are terrorizing thousands in northern California two years after Gov. Gavin Newsom cut … END_OF_DOCUMENT_TOKEN_TO_BE_REPLACED