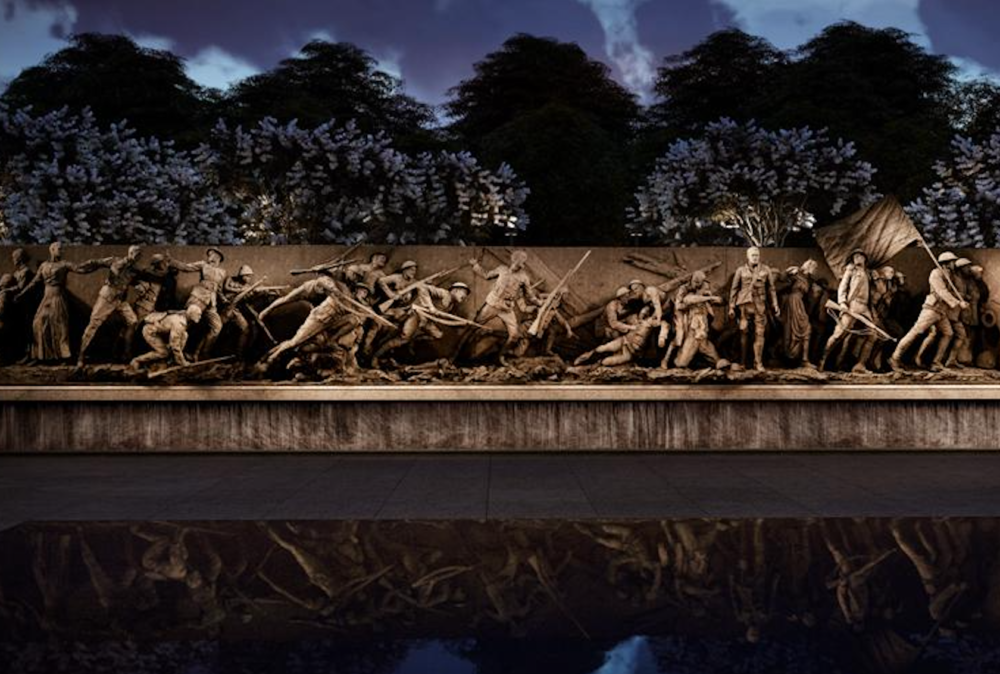 Take up our quarrel with the foe:
To you from failing hands we throw
The torch; be yours to hold it high.
If ye break faith with us who die
We shall not sleep, though poppies grow
In Flanders fields.

John McCrae’s immortal words of remembrance of all who fell in the Great War carried through a beautiful ceremony honoring the oft-forgotten war and America’s pivotal role. On Friday morning, politicians, historians, activists, military leaders, artists, and descendants virtually gathered to raise the American flag over the newly-erected World War I memorial in Washington DC.

As the last of the major 20th century US war veterans to receive a national memorial, those who served in WWI now have a powerful tribute to their sacrifice, bravery, and heroism. Hopefully, the monument will help return the Great War to public consciousness.

The monument is a peaceful place of reflection, erected in downtown Washington, D.C. within Pershing Park, which is named for John Pershing, General of the Armies who commanded America to victory in the Great War. The stone walls contain quotes from writings and poetry of WWI soldiers, and small fountains hide the city sounds.

The centerpiece of the memorial is a long statue featuring several war scenes leading into the other. The figures are near life-sized and each tableau has a sense of action, as well as fluidity between them, creating a palpable sense of immediacy to the images.

Joe Weishaar, the architect who designed the memorial, detailed his desire to center the monument on the stories of those who served. To supplement the beauty and remembrance of the physical structure, there is a multimedia aspect in the form of an app, which augments the experience by providing deeper learning to the attendees. The app can also be used outside the monument itself, allowing users to turn any area into a place of remembrance.

Actor and philanthropist Gary Sinise, best known for his Oscar-nominated turn as Lieutenant Dan in “Forrest Gump,” hosted the flag-raising from the office of his veteran service foundation. He opened the ceremony describing the American Soldiers, or doughboys as they were colloquially referred, in turning the tide of the war for the allied powers, overlaid with footage of the brave soldiers.

President Joe Biden gave a few brief prerecorded words, calling on attendants to “remember all that was sacrificed, all that was sanctified by all those who fought in World War I,” and to note how it fundamentally altered our nation’s in the international sphere.

The calls for a Great War memorial in the legislature was a bipartisan effort, spearheaded by Democratic Rep. Emanuel Cleaver and Republican former Rep. Ted Poe, and supported by members on both sides of the aisle. The pair’s passion for the project was clear in Cleaver’s moving prayer and Poe’s engaging speech.

Most of the speeches, however, maintained their focus on the brave “doughboys” in whose honor the memorial is created. Many speakers filled their time with specific stories of individual men who make up the 116,000 US casualties and their surviving brothers in arms.

Carole Moseley Brown, a former ambassador and senator, discussed the heroism of African American soldiers fighting for the freedom of Europeans abroad while facing discrimination and segregation back home. Sinise detailed the bravery of the first female soldiers, who served as telephone operators on the front lines, nicknamed “Hello Girls,” who were not granted veteran status until 1977.

However, the most moving of these true stories was when descendants recalled their courageous family members. A highlight was Gerald York, the grandson of the famed Sergeant Alvin York, who commemorated his grandfather both as a war hero and a person. Sergeant York was one of the most decorated soldiers in the Great War, and an Oscar-winning hit film was made about his life starring Gary Cooper, yet his proudest accomplishment was bringing education opportunities to rural Tennessee. His grandson noted his bravery and kindness, making him a shining example for our country.

The flag had quite a journey to reach Pershing Park, making a physical trip symbolic of that experienced by soldiers. It first was raised inside the US Capitol, before being flown to France to fly over a cemetery of American war dead, then spending time above the Liberty Memorial in Kansas City and finally arriving at its permanent home in DC.

Just before it was raised, the final words of the event were shared by Terry Hamby, the chairman of the World War I Centennial Commission. He dedicated the monument to the men and women of WWI, who answered the call to “serve in places they’ve never visited, for a war they didn’t start, to protect the freedom of people they’d never met.”

A pair of massive wildfires within 150 miles of each other are terrorizing thousands in northern California two years after Gov. Gavin Newsom cut … END_OF_DOCUMENT_TOKEN_TO_BE_REPLACED