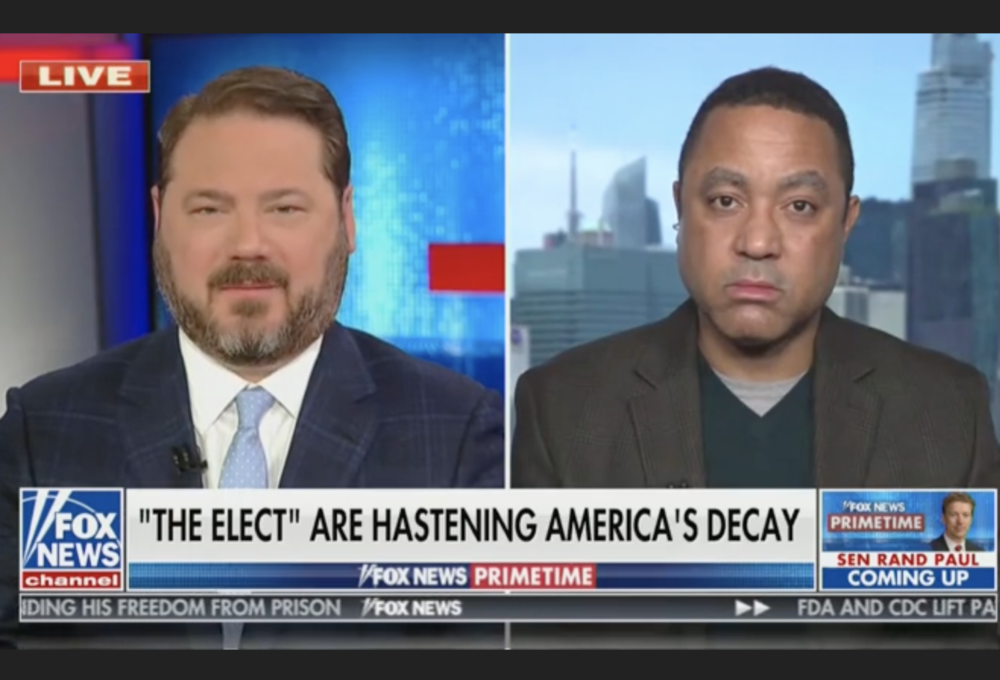 John McWhorter, an author and linguistics professor at Columbia University, said Friday that most of the leftists proposing radical racial changes are racists hiding behind language.

“The elect are, frankly, trying to ruin this country although they genuinely think that they’re bringing us in a new and beautiful direction,” McWhorter told Federalist Publisher Ben Domenech on Fox’s “Primetime.” “The elect are not the woke…the elect are the hyper woke. Or more to the point, the elect are the woke who are mean. People who’ve decided that in order to make the world properly woke, it makes sense to defenestrate people, destroy careers and reputations.”

One of the ways the ruling class continues to force identity politics on Americans, McWhorter said, is through education.

“I’m not somebody who’s usually for apocalyptic rhetoric, but there really is a genuinely alarming takeover of education happening right now which is based on the idea that black kids and also Latino kids should not be expected to actually get the answer, should not be expected to be precise, and to impose the strictures of math upon them is racist — that somehow being precise, not to mention being on time and cherishing the written word, is a white thing and that we have to ‘decenter whiteness,’” McWhorter said.

This mischaracterization is not only dangerous, McWhorter said, it is inherently racist.

“If you had a white person saying all of these things like 100 years ago with a southern accent, that’s the sort of person that we laugh at now as this unreconstructed and repulsive bigot,” he said. “But today, somebody says it while watching the second season of ‘Succession’ and sipping on some Knob Creek and probably barefoot and they think of themselves as progressive, and that’s somehow supposed to be higher wisdom. It’s truly racist. Oddly enough, these people are racists in a new guise, where they think of themselves literally as Jesus.”

The elect, McWhorter said, hijack language about social concepts and terms such as “social justice” to hijack words to push leftist causes.

“The idea is not to get a little nervous and hide in the corner when they say that you’re against social justice. Say yes, I’m in favor of social justice but what you mean by it is something quite different,” McWhorter said. “Meaning tends to drift from what words tend to formally mean. And then, of course, there’s the issue of racism and systemic racism, institutional racism — what exactly do we mean? Do we mean that the society is a bigot? Of course, we don’t mean that. What we’re talking about with institutional racism is that there are inequities…what the elect mean by ‘the inequities’ is that they must always be due to some obstacle that whiteness put in front of brown people.”

The best way to combat this false use of language, McWhorter said, is to stand your ground.

“The first thing we have to think about is how we can stand up to these people for the very simple reason that, what they do is they call you a racist and they know that you don’t want to be called a racist on Twitter and so you’ll do whatever they want,” McWhorter said. “We have to make it so that they can yell and scream as loud as they want to and don’t get what they want. After what would not be a very long while, they would start to back down and come up with other tactics.”

A pair of massive wildfires within 150 miles of each other are terrorizing thousands in northern California two years after Gov. Gavin Newsom cut … END_OF_DOCUMENT_TOKEN_TO_BE_REPLACED