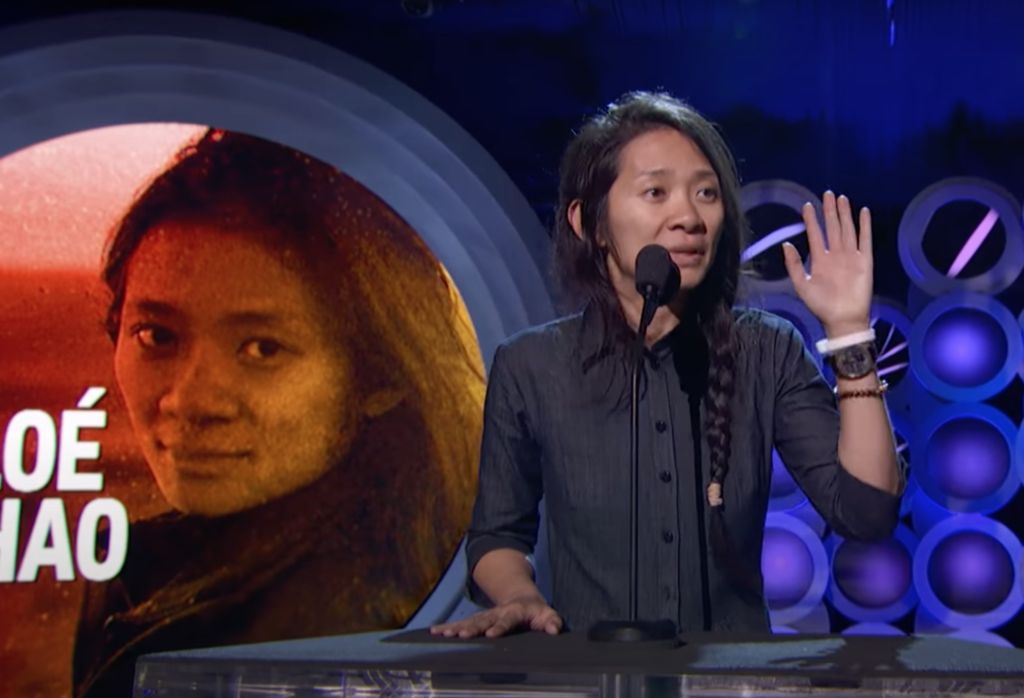 Long before director Chloé Zhao made it big, she gave an interview to Filmmaker Magazine. Published in 2013, the article quoted Zhao, born to a wealthy family in China, saying “there are lies everywhere” in her home country. Now that she’s Oscar-nominated for “Nomadland” and has a big-budget Marvel movie set to premiere this fall, Zhao’s quote is gone from the Filmmaker article, and the small publication won’t say why.

The answer is pretty obvious. Beijing’s notoriously sensitive powerbrokers, of course, have already taken note. Disney badly needs access to the Chinese market when it comes to releasing “Eternals,” Zhao’s forthcoming Marvel film. Angered by Zhao’s prior sentiments, Chinese Communist Party sensors could imperil the “Eternals” release, blocking their citizens from interacting with the work of a perceivably hostile artist who left China and found success in the West. The government actually took steps to censor online chatter about Zhao and “Nomadland” in March.

That means Disney is in damage-control mode, which would explain the missing quote from Filmmaker’s article on Zhao. The publication deleted the quote in February, eight years later, and added a note to say the story had been “edited and condensed after publication.”

Here’s how the quote originally appeared:

“It goes back to when I was a teenager in China, being in a place where there are lies everywhere,” she continues. “You felt like you were never going to be able to get out. A lot of info I received when I was younger was not true, and I became very rebellious toward my family and my background. I went to England suddenly and relearned my history. Studying political science in a liberal arts college was a way for me to figure out what is real. Arm yourself with information, and then challenge that too.”

The magazine took all of that out, nearly a decade after running it. Pressure from Disney is likely responsible.

I reached out twice to editor-in-chief Scott Macaulay to ask why Filmmaker removed the quote and whether Zhao’s publicist or anyone working on her behalf requested the change. He did not respond.

In China, another quote contributed to the backlash against Zhao, timed with her Golden Globes wins for “Nomadland.” In a March interview with News.com.au, Zhao was quoted as saying “the U.S. is now my country.” When the publication updated that quote to “the U.S. is not my country,” saying the wording was a simple mistake, it triggered questions about whether another outlet had scrubbed its story to placate Disney. After digging into the ordeal, I can confirm from a source that “now” was a genuine misquote.

The Zhao case study offers such a useful glimpse into Beijing’s sensitivity and how it affects corporations in the West. When it comes to Zhao, millions of dollars were on the line because of a few sentences from an eight-year-old article in an obscure magazine and a single misquoted word.

“Nomadland” poignantly captures rural America’s decline which, as we’ve covered before, has left some in China conflicted about icing out Zhao. Sadly, the country will never allow filmmakers to turn their lenses on the suffering in places like Xinjiang, where the CCP is overseeing a genocide of Uyghur Muslims.

Not only was Zhao able to freely pursue “Nomadland” in America, she’s being celebrated for it. On the other hand, the entertainment industry that’s eagerly showering Zhao in praise is also much more willing to criticize the country that enabled its art and wealth than a country in clear, wide-scale, severe violations of human rights.

That’s why Disney threatened to cease production in Georgia over pro-life legislation but is almost certainly working hard to clean up inoffensive quotes that could damage its bottom line in the Middle Kingdom. That’s why the company literally thanked government entities implicated in human rights abuses in the credits of the live-action “Mulan,” which was tailored specifically to Chinese audiences.

American companies and media outlets should take no part in muddying the clear contrast by protecting China’s international reputation from fair and necessary criticism. While it may enrich Hollywood in the short term, it empowers Beijing’s terrible abuses.

I get it’s easy to say that from behind a keyboard, without international pressures and people’s livelihoods hanging in the balance. But it’s also easy to see substantive costs of corporations’ hypocrisy when it comes to China.

Obaidullah Amin made his way last week to the Kabul airport with his wife, Maryam, and their two children, joining thousands of other Afghans … END_OF_DOCUMENT_TOKEN_TO_BE_REPLACED