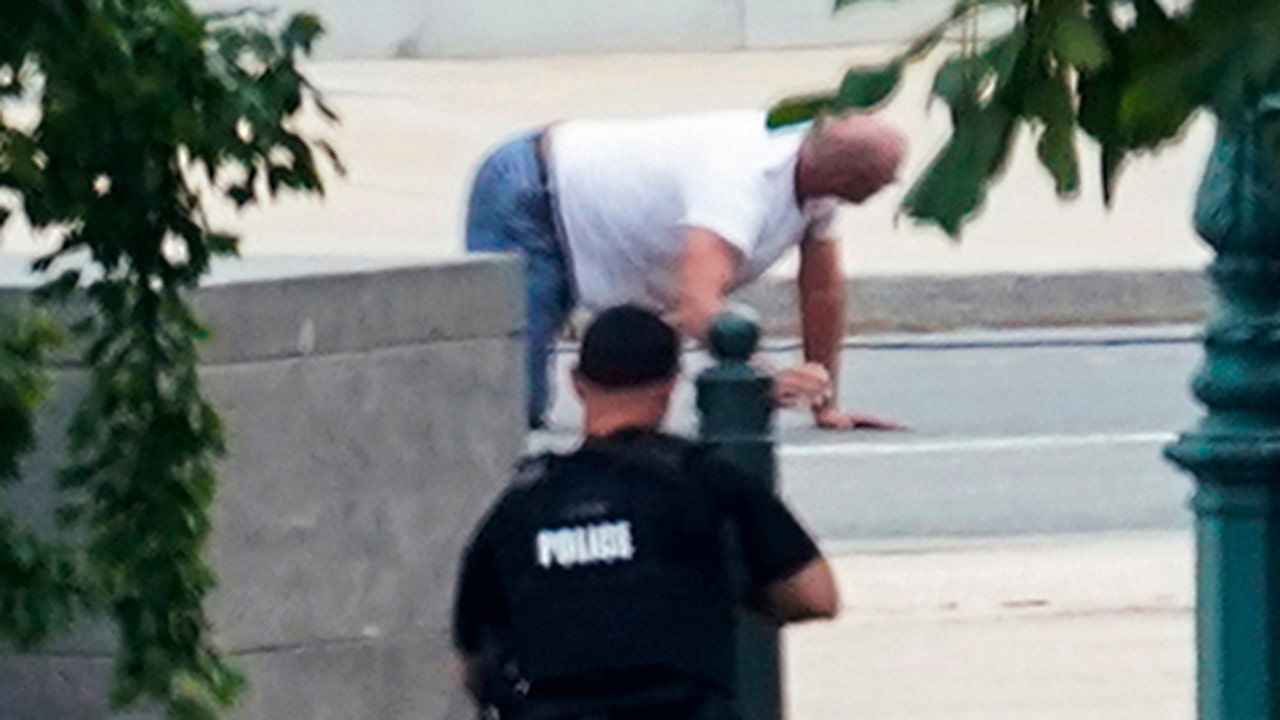 The suspect who surrendered to police after an hourslong bomb scare in front of Washington, D.C.’s Library of Congress is a North Carolina man and gun collector who had been dealing with “issues,” police officials and reports revealed Thursday afternoon.

No charges have been announced against the Grover, North Carolina man, who is 49 and is married, according to officials and local reports. Federal and local investigators visited Roseberry’s home on Thursday, sources told Fox News.

Video obtained by Fox News shows Roseberry slowly exiting the vehicle and kneeling to the ground.

Manger told reporters Roseberry was taken into custody without incident shortly after negotiators delivered a phone to him so they could communicate. He said Roseberry had recently experienced losses in his family.

“I believe his mother recently passed away … and there were other issues that he was dealing with,” Manger said. He added that investigators were in contact with Roseberry’s loved ones. Sources told Fox News federal and local investigators had already visited the man’s Grover home on Thursday.

Prior to his surrender, law enforcement agents communicated with Roseberry, a self-proclaimed grandfather, through notes written on a dry erase board.

“We don’t know if there are any explosives in the vehicle. It’s still an active scene,” Manger had said during the afternoon press conference. “While Mr. Roseberry has been taken into custody and has been removed from the scene, we still have to search the vehicle and render the vehicle safe.

During an earlier press briefing, Manger said police received a report around 9:15 a.m. of a man in a black pickup truck who drove onto the sidewalk in front of the Library of Congress. Police responded to a call for a disturbance, he said.

“The driver of the truck told the responding officer on the scene that he had a bomb. And what appeared, the officer said, appeared to be a detonator in the man’s hand,” Manger said. “We immediately evacuated the nearby buildings.”

The USCP announced the suspicious activity on its Twitter page just after 9:40 a.m. local time and urged people to stay away from the area. Police locked down some parts of the Capitol grounds while they investigated the threat. People in other areas were ordered to shelter in place.

MORE THAN 100 SENIOR VETERANS FLY TO WASHINGTON, DC TO VISIT MEMORIALS BUILT IN THEIR HONOR

While police continued negotiations, video surfaced of Roseberry on Facebook Live inside the truck, which was stuffed with coins and boxes. He was threatening explosions, making anti-government threats and talking about what he believes are the ills of the country, including the U.S. position on Afghanistan, health care and the military.

Roseberry’s ex-wife, Crystal Roseberry, told The Associated Press she had seen images of the man in the standoff at the Capitol and confirmed to the outlet that it was her ex-husband. She said had never known him to have explosives, but that he was an avid collector of firearms.

NBC Washington reported that Roseberry’s wife described how he had been experiencing mental health struggles and had switched medication.

She told the news station Roseberry told her he was taking a fishing trip and left Wednesday night. The woman said her husband had never voted before the 2020 Presidential election, when he voted for former President Donald Trump. He was reportedly unhappy with the election results.

Fox News’ David Spunt and Audrey Conklin contributed to this report, as well as The Associated Press.

A pair of massive wildfires within 150 miles of each other are terrorizing thousands in northern California two years after Gov. Gavin Newsom cut … END_OF_DOCUMENT_TOKEN_TO_BE_REPLACED