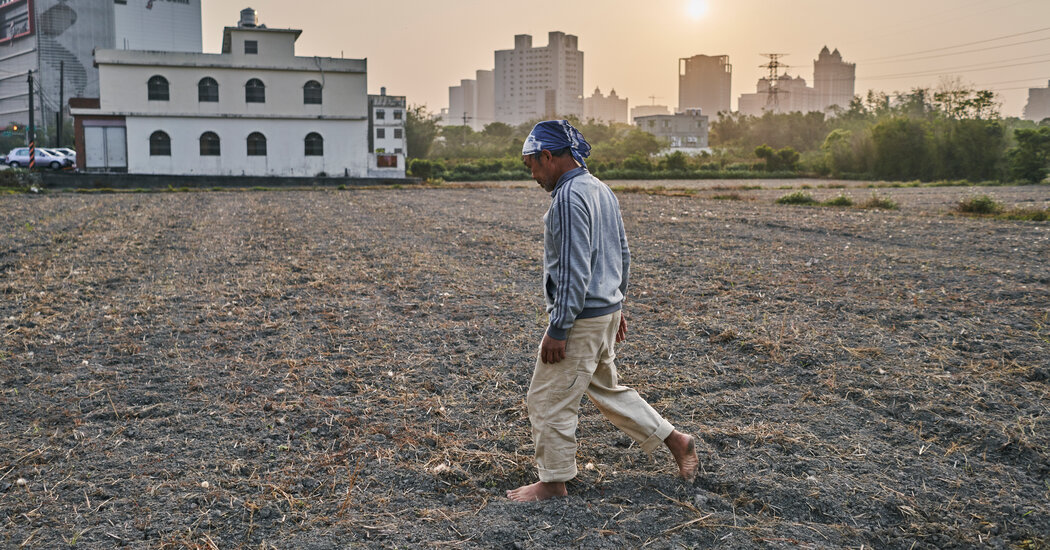 HSINCHU, Taiwan — Chuang Cheng-deng’s modest rice farm is a stone’s throw from the nerve center of Taiwan’s computer chip industry, whose products power a huge share of the world’s iPhones and other gadgets.

This year, Mr. Chuang is paying the price for his high-tech neighbors’ economic importance. Gripped by drought and scrambling to save water for homes and factories, Taiwan has shut off irrigation across tens of thousands of acres of farmland.

The authorities are compensating growers for the lost income. But Mr. Chuang, 55, worries that the thwarted harvest will drive customers to seek out other suppliers, which could mean years of depressed earnings.

Officials are calling the drought Taiwan’s worst in more than half a century. And it is exposing the enormous challenges involved in hosting the island’s semiconductor industry, which is an increasingly indispensable node in the global supply chains for smartphones, cars and other keystones of modern life.

Chip makers use lots of water to clean their factories and wafers, the thin slices of silicon that form the basis of the chips. And with worldwide semiconductor supplies already strained by surging demand for electronics, the added uncertainty about Taiwan’s water supply is not likely to ease concerns about the tech world’s reliance on the island and on one chip maker in particular: Taiwan Semiconductor Manufacturing Company.

More than 90 percent of the world’s manufacturing capacity for the most advanced chips is in Taiwan and run by TSMC, which makes chips for Apple, Intel and other big names. The company said last week that it would invest $100 billion over the next three years to increase capacity, which will likely further strengthen its commanding presence in the market.

TSMC says the drought has not affected its production so far. But with Taiwan’s rainfall becoming no more predictable even as its tech industry grows, the island is having to go to greater and greater lengths to keep the water flowing.

In recent months, the government has flown planes and burned chemicals to seed the clouds above reservoirs. It has built a seawater desalination plant in Hsinchu, home to TSMC’s headquarters, and a pipeline connecting the city with the rainier north. It has ordered industries to cut use. In some places it has reduced water pressure and begun shutting off supplies for two days each week. Some companies, including TSMC, have hauled in truckloads of water from other areas.

But the most sweeping measure has been the halt on irrigation, which affects 183,000 acres of farmland, around a fifth of Taiwan’s irrigated land.

“TSMC and those semiconductor guys, they don’t feel any of this at all,” said Tian Shou-shi, 63, a rice grower in Hsinchu. “We farmers just want to be able to make an honest living.”

In an interview, the deputy director of Taiwan’s Water Resources Agency, Wang Yi-feng, defended the government’s policies, saying the dry spell meant that harvests would be bad even with access to irrigation. Diverting scarce water to farms instead of factories and homes would be “lose-lose,” he said.

When asked about farmers’ water troubles, a TSMC spokeswoman, Nina Kao, said it was “very important for each industry and company” to use water efficiently and pointed to TSMC’s involvement in a project to increase irrigation efficiency.

That Taiwan, one of the developed world’s rainiest places, should lack for water is a paradox verging on tragedy.

Much of the water used by residents is deposited by the summer typhoons. But the storms also send soil cascading from Taiwan’s mountainous terrain into its reservoirs. This has gradually reduced the amount of water that reservoirs can hold.

The rains are also highly variable year to year. Not a single typhoon made landfall during last year’s rainy season, the first time that had happened since 1964.

Taiwan last shut off irrigation on a large scale to save water in 2015, and before that in 2004.

“If in another two or three years, the same conditions reappear, then we can say, ‘Ah, Taiwan has definitely entered an era of major water shortages,’” said You Jiing-yun, a civil engineering professor at National Taiwan University. “Right now, it’s wait and see.”

In 2019, TSMC’s facilities in Hsinchu consumed 63,000 tons of water a day, according to the company, or more than 10 percent of the supply from two local reservoirs, Baoshan and Baoshan Second Reservoir. TSMC recycled more than 86 percent of the water from its manufacturing processes that year, it said, and conserved 3.6 million tons more than it did the year before by increasing recycling and adopting other new measures. But that amount is still small next to the 63 million tons it consumed in 2019 across its Taiwan facilities.

Mr. Chuang’s business partner on his farm in Hsinchu, Kuo Yu-ling, does not like demonizing the chip industry.

“If Hsinchu Science Park weren’t developed like it is today, we wouldn’t be in business, either,” said Ms. Kuo, 32, referring to the city’s main industrial zone. TSMC engineers are important customers for their rice, she said.

But it is also wrong, Ms. Kuo said, to accuse farmers of guzzling water while contributing little economically.

“Can’t we take a fair and accurate accounting of how much water farms use and how much water industry uses and not stigmatize agriculture all the time?” she said.

The “biggest problem” behind Taiwan’s water woes is that the government keeps water tariffs too low, said Wang Hsiao-wen, a professor of hydraulic engineering at National Cheng Kung University. This encourages waste.

Households in Taiwan use around 75 gallons of water per person each day, government figures show. Most Western Europeans use less than that, though Americans use more, according to World Bank data.

Mr. Wang of the Water Resources Agency said: “Adjusting water prices has a big effect on society’s more vulnerable groups, so when making adjustments, we are extremely cautious.” Taiwan’s premier said last month that the government would look into imposing extra fees on 1,800 water-intensive factories.

“Other small countries are all extremely flexible,” Mr. Lee said, but “we have a big country’s operating logic.” He believes this is because Taiwan’s government was set up decades ago, after the Chinese civil war, with the goal of ruling the whole of China. It has since shed that ambition, but not the bureaucracy.

Taiwan’s southwest is both an agricultural heartland and a rising center of industry. TSMC’s most advanced chip facilities are in the southern city of Tainan.

The nearby Tsengwen Reservoir has shrunk to a marshy stream in some parts. Along a scenic strip known as Lovers’ Park, the floor of the reservoir has become a vast moonscape. The water volume is around 11.6 percent of capacity, according to government data.

In farming towns near Tainan, many growers said they were content to be living on the government’s dime, at least for now. They clear the weeds from their fallowed fields. They drink tea with friends and go on long bike rides.

But they are also reckoning with their futures. The Taiwanese public appears to have decided that rice farming is less important, both for the island and the world, than semiconductors. The heavens — or larger economic forces, at least — seem to be telling the farmers it is time to find other work.

Serene farmland surrounds the village of Jingliao, which became a popular tourist spot after appearing in a documentary about farmers’ changing lives.

There is only one cow left in town. It spends its days pulling visitors, not plowing fields.

Both of Mr. Yang’s sons work for industrial companies.

“If Taiwan didn’t have any industry and relied on agriculture, we all might have starved to death by now,” Mr. Yang said.

Obaidullah Amin made his way last week to the Kabul airport with his wife, Maryam, and their two children, joining thousands of other Afghans … END_OF_DOCUMENT_TOKEN_TO_BE_REPLACED