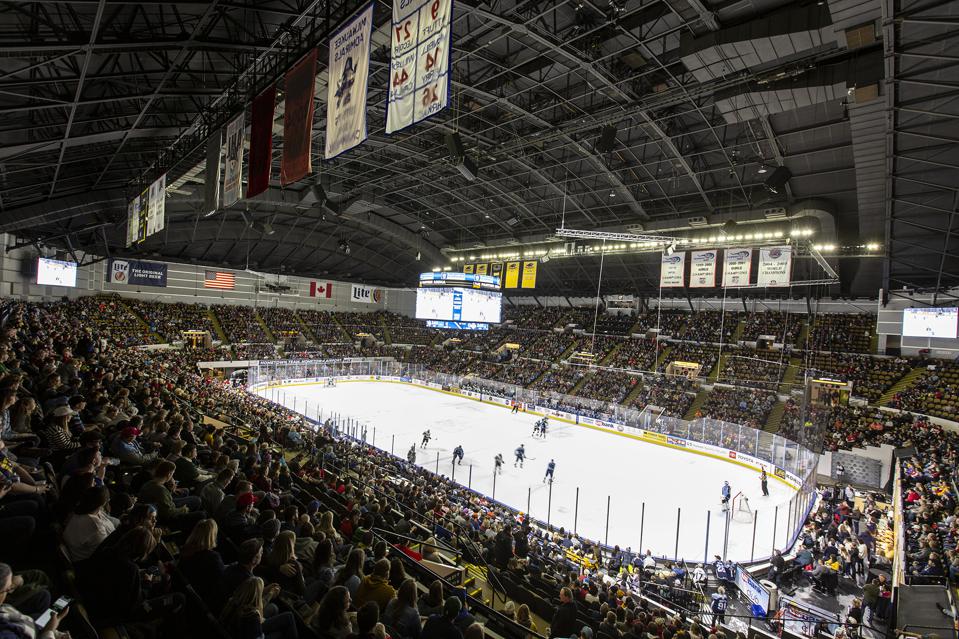 It had been an entire year since the Milwaukee Admirals played their last game, a 6-1 victory over the San Antonio Rampage at the Milwaukee Panther Arena, but unlike the city’s other professional sports entities, it would be at least another six months before the Admirals returned to the ice.

Because of the ongoing pandemic, the Admirals opted out of the 2020-21 AHL season in large part because the City of Milwaukee was still restricting the size of public gatherings due to the pandemic and had not yet granted permission for local teams and performing arts groups to reopen their doors.

So while the NBA’s Bucks and Major League Baseball’s Brewers were slowly welcoming fans back in limited numbers, the team, it’s staff and fans could only wait and hope that the vaccine rollout would be successful enough for a return to normalcy in the fall.

But what should have been a somber and sullen day around the office on March 11 was anything but. A year after that last game — a 6-1 victory over the San Antonio Rampage — it was business as usual for the Admirals’ staff thanks to the kind of outside-the-box thinking that is the hallmark of minor league sports.

“We wanted to do something,” said Heather Wojciechowski, the team’s Director of Entertainment. “We just didn’t know what.”

The “what” turned out to be a virtual game, an almost perfectly fitting exercise in this strange era of working-from-home, virtual schooling and drive-by birthday celebrations. Wojciechowski learned of a similar event held earlier in the year and pitched it as a way to mark the unfortunate anniversary and after some early head-scratching from her coworkers, the idea took off quickly.

“I got blank stares,” Wojciechowski said of the initial reaction. “Nobody understood exactly what I meant at first but people were excited to be back in front of our fans and the community again.”

There was, of course, no actual game. As the top developmental affiliate of the NHL’s Nashville Predators, many of the team’s players were temporarily assigned elsewhere for the season, but as is often the case with minor league sports, the actual game itself is often secondary to the ancillary activities and entertainment.

And that’s what the Admirals planned to bring to their fans, virtually, on March 11.

“I started going through our scripts and pulling out all the things we would do on an actual game day,” Wojciechowski said. “Things like the National Anthem, our starting lineups … then we started planning photo shoots and getting submissions from our fans for things like the “Smile Cam and Dance Cam.”

There was also a virtual t-shirt toss, “chuck-a-puck” and even, the fan-favorite “human hockey puck.”

As Wojciechowski and her staff started putting the virtual script together, Jaymee Ebbers, the Admirals’ New Media Coordinator, focused on putting the content out for the world to see and reconnect with a fanbase that had gone a year without attending a game.

“This was really community-driven,” Ebbers said. “It gave us a chance to re-engage with people that we haven’t seen in a while. We wanted to bring our fans back because they’re the people who mean the most to this organization.”

The virtual game was a hit. Ebbers said the content generated over 150,000 impressions throughout out the day, a significant increase from the 123,080 impressions generated during the actual game on March 11, 2020.

And beyond re-engaging with fans, the event also raised over $1,200 for the Admirals Power Play Foundation, which last year donated over $60,000 to various local charities, and helped the team strengthen relationships with its numerous corporate partners, who have maintained their relationships with the team despite the hiatus.

“We have such great loyalty from our season-ticket holders and our corporate partners,” Admirals president Jon Greenberg said. “Our partners have been great about sticking with us so to be able to show a little bit of what they do, especially at a time when they’re not in front of eyeballs in our arena, was really important.”

Greenberg credited his staff for not only coming up with the idea, but executing it flawlessly.

“It was probably the easiest ‘yes’ I’ve given in a year,” Greenberg said. “The one thing my staff misses most is doing events and being able to put together a show. They do it so well so for them to be able to take a hold of this idea, put together a lot of the elements of what we do and put them into play … they did a great job with it.

“To use a baseball reference, it was a home run.”

A pair of massive wildfires within 150 miles of each other are terrorizing thousands in northern California two years after Gov. Gavin Newsom cut … END_OF_DOCUMENT_TOKEN_TO_BE_REPLACED