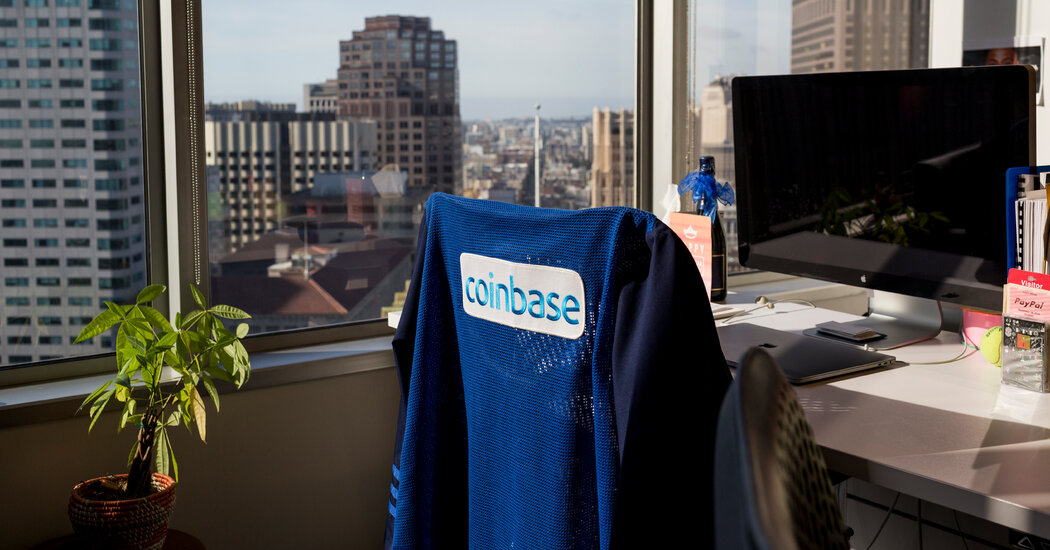 Shares in Coinbase, the first major cryptocurrency company to list its shares on a U.S. stock exchange, jumped in their market debut on Wednesday, showing that investors are hungry to get a piece of the hot market for digital currencies.

Coinbase began trading on Wednesday afternoon at $381 a share, a 52 percent increase over a $250 reference price set by Nasdaq on Tuesday. (A reference price is set by a stock exchange based on expectations for where the stock will open.)

The stock swung as low as $310 and as high as $429 in a volatile day of trading that reflected the unpredictable nature of cryptocurrency prices. Coinbase ended the day at $328.28, valuing the company at $85.7 billion counting all of its outstanding shares — more than 10 times its last valuation as a private company.

Founded in San Francisco in 2012, Coinbase allows people and companies to buy and sell various digital currencies, including Bitcoin, the most popular, and Ether. The company, which takes a transaction fee, has been riding high on a boom year for cryptocurrencies, as investors have poured money into the assets and driven their prices to new highs.

This week, the price of Bitcoin hit a record $64,000 amid excitement for Coinbase’s listing, double its value at the beginning of this year. On Wednesday, prices had come down to $61,939.

Unlike many other start-ups that go public, Coinbase is profitable. In the first three months of the year, it estimated it made $730 million to $800 million in net profit on $1.8 billion in revenue. But the company warned in its financial prospectus that its business performance was closely tied to the price of cryptocurrencies, which are volatile.

Coinbase has raised more than $500 million from venture capital investors, who last privately valued it at $8 billion. Its largest shareholders include Andreessen Horowitz, Tiger Global and Paradigm, a crypto-focused investment firm.

Brian Armstrong, Coinbase’s chief executive and a co-founder, owns nearly 40 million shares in the company, making his stake worth roughly $13 billion. Over the last year, Mr. Armstrong has said Coinbase employees should avoid political discussions, a stance that has caused controversy. Some of the company’s former Black and female employees have also spoken out against unfair treatment and were found to have been underpaid in a company report.

Coinbase went public through a direct listing, an unusual transaction where no new shares are issued or sold — they simply start trading. Coinbase is the largest company to go public via direct listing, which has become popular among well-funded Silicon Valley start-ups that do not need to raise more cash from public market investors. Direct listings do not have traditional lockup periods that prevent insiders from selling shares for the first six months after the listing.

Coinbase’s listing on the Nasdaq stock exchange gives traditional investors, who may be interested in digital currencies but are unable or unwilling to buy them directly, an indirect way to buy into the market. The company’s financial prospectus included a glossary of crypto-specific terms, including internet slang like “hodl,” which means holding on to your cryptocurrency investments even when the prices tank.

As demand for cryptocurrencies has surged this year, Coinbase has struggled to keep up with the demand. Some customers whose accounts were plundered by attackers or who were locked out of their accounts have said the company ignored their pleas for help.

Obaidullah Amin made his way last week to the Kabul airport with his wife, Maryam, and their two children, joining thousands of other Afghans … END_OF_DOCUMENT_TOKEN_TO_BE_REPLACED