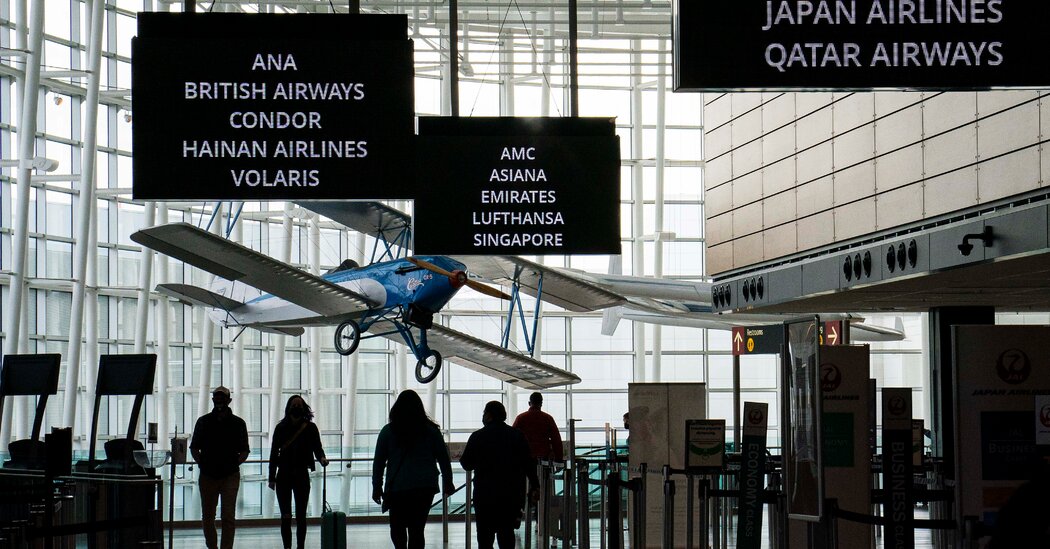 Americans who are fully vaccinated against Covid-19 can safely travel at home and abroad, as long as they take basic precautions like wearing masks, federal health officials announced on Friday, a long-awaited change from the dire government warnings that have kept many millions home for the past year.

In announcing the change at a White House news conference, officials from the Centers for Disease Control and Prevention stressed that they preferred that people avoid travel. But they said growing evidence of the real-world effectiveness of the vaccines — which have been given to more than 100 million Americans — suggested that inoculated people could do so “at low risk to themselves.”

The shift in the C.D.C.’s official stance comes at a moment of both hope and peril in the pandemic. The pace of vaccinations has been rapidly accelerating across the country, and the number of deaths has been declining.

Yet cases are increasing significantly in many states as new variants of the coronavirus spread through the country. Just last Monday, Dr. Rochelle P. Walensky, the C.D.C. director, warned of a potential fourth wave if states and cities continued to loosen public health restrictions, telling reporters that she had feelings of “impending doom.”

suggested such cases might be rare, but until that question is resolved, many public health officials feel it is unwise to tell vaccinated Americans simply to do as they please. They say it is important for all vaccinated people to continue to wear masks, practice social distancing and take other precautions.

Under the new C.D.C. guidance, fully vaccinated Americans who are traveling domestically do not need to be tested for the coronavirus or follow quarantine procedures at the destination or after returning home. When they travel abroad, they only need to get a coronavirus test or quarantine if the country they are going to requires it.

coronavirus test before boarding a flight back to the United States, and they should get tested again three to five days after their return.

The recommendation is predicated on the idea that vaccinated people may still become infected with the virus. The C.D.C. also cited a lack of vaccine coverage in other countries, and concern about the potential introduction and spread of new variants of the virus that are more prevalent overseas.

Most states have accelerated their timelines for opening vaccinations to all adults, as the pace of vaccinations across the country has been increasing. As of Friday, an average of nearly three million shots a day were being administered, according to data reported by the C.D.C.

The new advice adds to C.D.C. recommendations issued in early March saying that fully vaccinated people may gather in small groups in private settings without masks or social distancing, and may visit with unvaccinated individuals from a single household as long as they are at low risk for developing severe disease if infected with the virus.

Travel has already been increasing nationwide, as the weather warms and Americans grow fatigued with pandemic restrictions. Last Sunday was the busiest day at domestic airports since the pandemic began. According to the Transportation Security Administration, nearly 1.6 million people passed through the security checkpoints at American airports.

But the industry’s concerns are far from over. The pandemic has also shown businesses large and small that their employees can often be just as productive working remotely as in face-to-face meetings. As a result, the airline and hotel industries expect it will be years before lucrative corporate travel recovers to prepandemic levels, leaving a gaping hole in revenues.

And while leisure travel within the United States may be recovering steadily, airlines expect it will still take until 2023 or 2024 for passenger volumes to reach 2019 levels, according to Airlines for America, an industry group. The industry lost more than $35 billion last year and continues to lose tens of millions of dollars each day, the group said.

The C.D.C. on Thursday also issued more detailed technical instructions for cruise lines, requiring them to take steps to develop vaccination strategies and make plans for routine testing of crew members and daily reporting of Covid-19 cases before they can run simulated trial runs of voyages with volunteers, before taking on real passengers. The C.D.C.’s directives acknowledge that taking cruises “will always pose some risk of Covid-19 transmission.”

Some destinations and cruise lines have already started requiring that travelers be fully vaccinated. The cruise line Royal Caribbean is requiring passengers and crew members 18 or older to be vaccinated in order to board its ships, as are Virgin Voyages, Crystal Cruises and others.

For the moment, airlines are not requiring vaccinations for travel. But the idea has been much talked about in the industry.

Obaidullah Amin made his way last week to the Kabul airport with his wife, Maryam, and their two children, joining thousands of other Afghans … END_OF_DOCUMENT_TOKEN_TO_BE_REPLACED